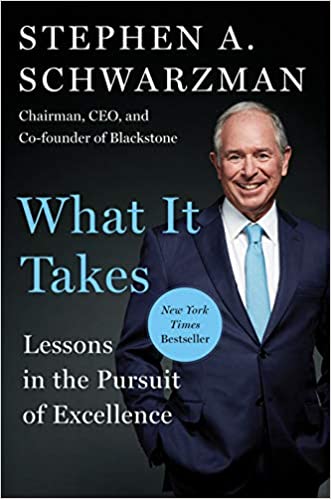 What It Takes: Lessons in the Pursuit of Excellence

A native of Northeast Philadelphia, Stephen Schwarzman grew from humble beginnings to become one of the world’s preeminent financiers, investors, and philanthropists. Split into four themes, the book touches on Schwarzman’s inflection points and lessons throughout his life. Schwarzman intertwines stories from his early life, tenure at Lehman Brothers, rise as the founder of The Blackstone Group, and time spent as an advisor to several world leaders, while sharing his lessons learned in the pursuit of excellence.

“The best executives are made, not born. They absorb information, study their own experiences, learn from their mistakes, and evolve” (p. 3).

When you see potential in a person, you have to systematically equip them with what they need to be successful. For example, while at Yale, he started the pilot project to educate inner city students on Yale’s generous financial aid program (p. 28). Additionally, at Blackstone, all investment teams gathered to talk about the economy and politics, shared insight and ideas, and discussed the live deals every Monday at 8:30 am. Everyone at Blackstone could attend, which demonstrated the organization’s commitment to transparency, equality, and intellectual integrity (p. 194). Schwarzman believes, “Teaching is about more than sharing knowledge. You have to remove the obstacles in people’s way. In my case, the obstacle was the gap between my education up to that point and the education of my peers” (p. 22).

Schwarzman understood that everything is interconnected and the best way to learn is by doing. While at Lehman, he was the lead underwriter in the IPO of the Student Loan Marketing Association, the precursor to Sallie Mae (p. 58). He received advice “to build a model of why this is a good investment. Everything’s a spread” (p. 59). George Putnam taught him about the common practice of the United Jewish Appeal (UJA) – card calling. It created high standards, applied peer pressure, and proved useful when making quick decisions on how much to invest. He believed that “investors are always looking for great investments. The easier you make it for them, the better for everyone” (p. 61).

Schwarzman believes that “you can’t just pitch once and be done. Just because you believe in something doesn’t guarantee anyone else will. You’ve got to sell your vision over and over again. Most people don’t like change, and you have to overwhelm them with your argument, and some charm. If you believe in what you’re selling and they say no, you have to presume that they don’t fully understand, so you give them another opportunity” (p. 113).

As Blackstone expanded, Schwarzman made a poor investment decision in Edgecomb. Upon reflection, they fell into a trap common to many organizations. When individuals pitch an idea, they address the leader. And, they go through the same routine until one idea is near-okay and the boss may approve the proposal to keep the peace. With Edgecomb, Schwarzman didn’t embrace the doubts that others had. It caused him to improve the decision making at Blackstone (p. 150-151). “Finance is full of people with charm and flip charts who talk so well and present so quickly you can’t keep up. So, you have to stop that show. Decisions are much better made through systems designed to protect businesses and organizations than through individuals. We needed rules to depersonalize our investment process” (p.151).

By examining Blackstone’s decision making, they decided to involve all senior partners in discussions of investments (p. 151). Additionally, they insisted that proposals needed a thorough written memorandum which should be circulated at least two days before any meetings, so it could be logically evaluated (p. 151). Meetings had two rules:

Schwarzman also resolved to never just talk to the lead partner. By speaking to the most junior person closest to the project, it allowed him to get a different read on the situation (p. 152-153). It was important to depersonalize and de-risk the decision-making process. As Blackstone added new businesses and ventured into new markets, they “[applied] this same process to all investment decisions. Everyone contributes to the discussion. Risk is systematically broken down and understood. Debate is full and robust. The same small groups of people, who know each other well, go over each investment applying the same rigorous standard. This unified approach to investing has become the backbone of the Blackstone way” (p. 153).

As politics became more relevant in the financial industry, Schwarzman took the opportunity to expand his network in order to learn more and meet new people. In 2004, Ted Kennedy asked Schwarzman to become the chairman of the Kennedy Center for Performing Arts in Washington, DC. Ted Kennedy inspired Schwarzman by saying, “I’ll support you and make sure you get the funding you need from Congress. I’ll support you even if you screw up. And anything you need here in DC, call me and I’ll make it happen for you.” While Schwarzman was initially wary of  “political complexity,” he eventually accepted the opportunity (p. 184).

The involvement with the Kennedy Center put Schwarzman back in touch with George W. Bush, who was at Yale during the same time. “If you met us both in the late 1960s at Yale, you would have been surprised to find either of us at the White House, decades later, pillars of the establishment. It was a real pinch-me moment and another reminder of how people you meet accidentally early in life keep popping up to surprise you” (p. 185).

Blackstone grew rapidly and Pete Peterson, Schwarzman’s partner, who was now in his late seventies, advised Schwarzman to find help with the day-to-day management. After over a year of searching, Steve Schwarzman connected with Tony James of DLJ who, to his memory, was the only person he remembered that stood by his firm’s position (p. 191-192). When Schwarzman reached out to his old friends at DLJ, they all vouched that Tony James would be an ideal partner. Tony James was phased in so the partners would get used to his style and direction without creating resentment. Tony was able to “literally break down the wall”, implement 360-degree reviews, and create “a discipline and orderliness” to Blackstone (p. 194-196).

On September 17, 2008, the financial system was struggling. His wife asked, “What are you going to do to stop the whole thing?” He responded that he didn’t have the ability to stop it. With persistence, his wife convinced Schwarzman to called Hank Paulson, the Secretary of the Treasury. His wife advised, “When you call him, you ought to have some solutions to help him” (p. 253). With urgency and conviction, Hank listened to Schwarzman and became a friend to the situation when he volunteered to be part of the solution. Schwarzman turned a crisis into opportunity in 2012. Because home prices fell sharply and individuals were foreclosing on their homes, the market was flooded with houses for sale. “Historically, mom-and-pop operations dominated the business of buying, fixing, and renting out houses in America” (p. 275). The real estate team at Blackrock saw an opportunity to consolidate and professionalize the sector. Since it was the largest asset class and was trading at historic lows, Schwarzman created a company called Invitation Homes. It became the largest residential property owner and a huge employer in the downturn of the economy.

With a mission to be the best, Schwarzman engaged with various organizations. He answered when the country called, helped to create the first AI-enabled university in the world at MIT, supported the USA Track & Field Foundation, started the Schwarzman Scholars in China, and contributed to other schools from Catholic grade schools to Yale University. He believes that “education is the passport to a better life. A good education has the power to affect whomever it touches for the better. We all have a duty to not only preserve the knowledge that is handed to us but also develop it in a way that improves its relevance and impact for future generations.”

Schwarzman, S. (2019) What It Takes: Lessons in the Pursuit of Excellence. New York: Avid Reader Press.